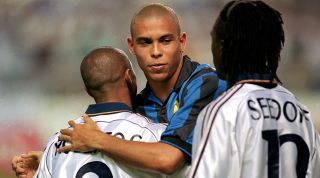 The current PSV manager made 79 appearances in the competition, initially with the Dutch side and then during his six-year spell with Barcelona.

Cocu left the Camp Nou just before Barça's recent European dominance, though, with the Catalans winning the first of their four trophies in the 21st century two years after his 2004 departure.

Vieira is another midfielder who played plenty of times in the Champions League - 76 in total - for three different clubs in Arsenal, Juventus and Inter.

The former France international was a nearly man, though, leaving the Gunners 12 months before they reached the 2006 final and then departing the January before Inter won it in 2010. He wasn't eligible for a medal.

One of Italy's all-time greats, Cannavaro and his haul of 138 international caps is second only to another name on this list, and he also won the Ballon d'Or in 2006.

Yet despite playing for Parma during the peak of their European powers in the late 1990s, as well as Inter, Juventus and Real Madrid subsequently, a Champions League medal is missing from the World Cup winner's collection.

Fabregas has made over 100 appearances in the competition, but the Spaniard was a runner-up with Arsenal in 2006, before earning his dream move back to boyhood club Barcelona five years later – just after they had won their fourth Champions League in its current format.

He left for Stamford Bridge in 2014, the summer before the Catalans' fifth and most recent success. Cesc would not have been amused.

With 56 Champions League goals to his name, Van Nistelrooy is the highest-scoring player never to have won the tournament.

The striker joined Manchester United two years after their historic 1999 treble and left two years before their next European win. He also failed to achieve any continental glory during his four years with Real Madrid.

To make matters worse, the Dutchman has been the top scorer in the tournament on three different occasions, while his return of 56 strikes in 73 appearances gives him a better goals-per-game rate than Cristiano Ronaldo. Where's the justice?

Part of the same Parma team as Cannavaro, the Argentine played for some of Europe's best clubs and even scored two goals in a Champions League final.

Unfortunately for Crespo that brace came in 2005, when Liverpool famously came back from 3-0 down to beat Milan on penalties. The luckless striker later left Inter a year before they claimed the trophy under Jose Mourinho.

Nedved, like Crespo, was part of a team that reached the Champions League final – but Juventus were edged out by Milan in 2003.

The Czech played no part in the dour Old Trafford showpiece, though, as suspension prevented him from playing. That was the closest he ever came to winning the tournament.

His namesake Cristiano has four winner's medals already, but Brazilian Ronaldo never won the Champions League despite playing for some of the most illustrious clubs in Europe.

PSV, Inter, Barcelona, Madrid and Milan are among the forward's former teams, but the man who was named the best player in the world in 1997 and 2002 was never able to scoop European club football's top prize.

Like Nedved, Thuram was also a runner-up in 2003, although the Frenchman did actually play for Juve in that game.

The right-back did his job, keeping Milan at bay for 120 minutes in a 0-0 draw, but misses from David Trezeguet, Marcelo Zalayeta and Paolo Montero in the shootout led to the Old Lady losing on penalties.

Thuram was also a member of the aforementioned Parma team that lifted the UEFA Cup in 1999, while he later joined Barcelona just after they won the Champions League in 2006.

Finishing runner-up with one team is bad enough, but to do it with two must be galling. That's the fate that befell Ballack: first in 2002 with Bayer Leverkusen, then six years later with Chelsea.

The midfielder was on the wrong side of one of the competition's greatest ever goals in his first final defeat, as Zinedine Zidane converted with a magnificent volley. In 2008 he was forced to watch on as John Terry and Nicolas Anelka's missed spot-kicks handed the trophy to Manchester United. The German at least scored his own penalty that night (because obviously).

The ex-Manchester United striker holds the unwanted record of making the most Champions League appearances (120) without ever lifting the trophy. Now 36 and playing for LA Galaxy in Major League Soccer, we're going to go out on a limb and say he's played his last game in Europe's elite club competition.

Ibrahimovic, then, is another nearly man: he left Inter a year before they won it in 2010, before doing exactly the same thing at Barcelona the following summer. He also represented Ajax, Juventus, Milan, PSG and Manchester United to no avail.

Buffon is the only man to have won more caps for Italy than Cannavaro - and he's some way ahead too, on 176.

Signed from Parma for a world-record €52m fee in 2001 – in Euros, a goalkeeping record that actually still stands – the veteran is second only to Alessandro Del Piero on Juventus's all-time appearance list.

Buffon has also been on the wrong end of three final defeats, making two penalty shootout saves in 2003, then watching Barcelona run out 3-1 winners in 2015. Most recently the Italian legend suffered in 2017 when his beloved Juve were on the wrong side of a 4-1 hiding from Real Madrid.