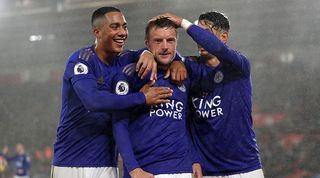 The Gunners finished second, some 12 points behind champs Manchester United, while Everton secured a Champions League play-off spot despite the thrashing. Not bad going considering the departure of Wayne Rooney in summer 2004, months after they’d finished 17th.

Poor Forest. Manchester United recorded the Premier League's biggest ever away win at the City Ground in February 1999. Dwight Yorke had opened the scoring inside two minutes, Alan Rogers levelled it up shortly after, but Andy Cole restored the advantage before seven minutes were on the clock. And yet astonishingly, this game was only 2-1 at half-time.

Even with 10 minutes to go it was ‘only’ 4-1 after Yorke and Cole had both completed braces. But Ole Gunnar Solskjaer – a 72nd-minute entrant – didn’t get his supersub tag for nothing, and netted four in the final exchanges. It’s still a record for a substitute.

Ron Atkinson's Forest were relegated at the end of the season – they’ve never been back since – while Alex Ferguson’s side achieved the greatest season in English football history. Decent enough.

When Sven-Goran Eriksson rocked up at the Riverside to face Middlesbrough on the final day of the 2007/08 season, his future already seemed decided after a shocking run of form after Christmas. City had been third in November before things went south very suddenly.

And so to their Teesside humiliation. Afonso Alves scored a hat-trick, Stewart Downing got two, while Adam Johnson, Fabio Rochemback and Jeremie Aliadiere all helped themselves to goals in the final 20 minutes.

The Eastlands outfit finished ninth and Sven was finally put out of his misery by owner Thaksin Shinawatra, who’d wanted to pull the trigger since April. Gareth Southgate's Boro ended 13th… but then dropped out of the top flight the following campaign.

Chelsea knew a victory on the final day of the season would secure them their first title since 2006. Suffice to say, they didn’t muck about in getting it done.

Didier Drogba got a hat-trick and Nicolas Anelka added two more, while Ashley Cole, Salomon Kalou and Frank Lampard were also among a beleaguered Latics’ nemeses. Unsurprisingly, Wigan ended the season with a goal difference of -42… and this wasn’t even their worst humbling of the campaign.

Carlo Ancelotti's Chelsea became the first team in English history to score seven or more goals on four occasions in a league season. They also became the first Premier League side to bag 100 in a season after putting away a club-record 103 in the campaign.

One of four 8-0 wins in Premier League history – but this time City were on the right end of a trouncing.

Their opening salvo was astonishing at the Etihad Stadium: David Silva scored after 52 seconds, and within 18 minutes they were 5-0 up after goals from Sergio Aguero, Riyad Mahrez, Bernardo Silva and Nicolas Otamendi.

Mercifully for Watford there was a breather – but the Hornets crumbled again within three minutes of the second half and allowed Bernardo his hat-trick by the hour mark. Kevin De Bruyne put the cherry on top with five minutes remaining to cap a masterful individual display.

Paul Lambert’s Aston Villa suffered their biggest Premier League defeat in December at Stamford Bridge – and it could have been even worse had Lucas Piazon not seen an 89th-minute penalty saved.

After a smashing 3-1 away win at Anfield a week earlier, the Villans went into this game full of confidence; confidence which was quickly shattered when Fernando Torres opened the scoring within three minutes. David Luiz and Branislav Ivanovic added more before the break, while Frank Lampard, Ramires (two), Oscar and Eden Hazard all got among the fun before full-time.

It was the first – and still the only – time that seven players from one team have scored in a Premier League match. The result was Rafa Benitez's biggest victory in English football, eclipsing the 6-0 win he achieved with Liverpool over Derby in 2007.

Ruud Gullit resigned after Newcastle lost four of their first five games in the 1999/00 campaign, paving the way for Bobby Robson to arrive on Tyneside in September. The Magpies had lost two more before this game, but made Bobby’s St. James' Park debut against Sheffield Wednesday one to remember as the Gallowgate Godfather pulled off a famous victory.

Tottenham finished fourth in 2009/10, meaning they qualified for Europe’s elite competition for the first time since 1962. This result certainly did that achievement no harm as they ended the campaign three points ahead of Manchester City.

Let it be remembered that Spurs were only 1-0 ahead at half-time in this obliteration of a carefree Wigan. Forty-two minutes passed between Peter Crouch’s ninth-minute opener and Jermain Defoe’s first of five goals on this most profitable of afternoons at White Hart Lane. Aaron Lennon, David Bentley and Niko Kranjcar were also on target in north London.

It was only the second time that a Premier League side had scored nine goals, and the third that a player had netted five in a Premier League match. Wigan still finished six points above the relegation zone.

It’s largely forgotten now that Ipswich had beaten Manchester United 3-2 earlier this season – one of only seven victories all campaign as they finished bottom and were relegated. This result, the Premier League’s record defeat, was a little more befitting of their campaign in which they finished 21 points from safety.

Unlike a lot of the trouncings in this list, goals here were neatly spread throughout the game – consistent haplessness from the Tractor Boys, if you will.

Andy Cole helped himself to five, Mark Hughes plundered two, while Roy Keane and Paul Ince both added solitary strikes in what was United's biggest victory for 103 years. Blackburn claimed the title that season, though, with Fergie’s men finishing second.

A remarkable way to honour a remarkable man. A year ago on this weekend, Leicester City lost their beloved chairman Vichai Srivaddhanaprabha after a horrific helicopter crash outside the King Power Stadium. Here, with the visiting fans holding aloft white scarves in his honour, Foxes players did him justice with this devastating display on the south coast.

Southampton were onto a hiding in the 10th minute when Ben Chilwell slotted Leicester ahead, and in the same passage saw Ryan Bertrand sent off via a VAR-assisted decision. It was 3-0 inside 19 minutes courtesy of efforts from Youri Tielemans and Ayoze Perez, who ended the game with a hat-trick. James Maddison netted a wonderful eighth with a free-kick, sandwiching hat-trick goals from Jamie Vardy – the last, a stoppage-time penalty which befitted this all-time biggest Premier League away win.

LIST The 10 most surprising managerial appointments in Premier League history

FEATURE When Portsmouth’s 6.57 Crew tried to hijack the general election – and accidentally helped the Tories win