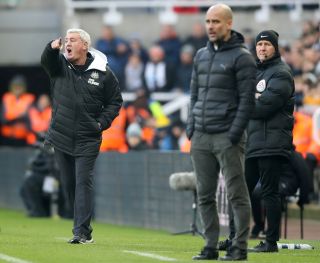 Man City won't be getting their hands on the Premier League title this season but a clean sweep of the cups for a second year running remains a very real possibility.

Guardiola's side have already claimed this season's League Cup, following February's 2-1 defeat of Aston Villa, and now their attention turns to the FA Cup. In their path lies Steve Bruce and his Toon Army - who haven't won this competition since 1955.

Bruce may be fighting for his job, with talks of a Saudi takeover ongoing. A run to the FA Cup final, alongside Premier League survival, would surely be enough to keep his name on the door to the manager's office. Few would begrudge him that, either, given the decent job he's done since arriving on Tyneside.

Kick-off is at 6.30pm BST and the game is being shown on BBC One and BBC iPlayer in the UK. See below for watching details where you are.