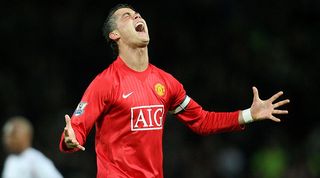 There are few things in sport more satisfying than watching an athlete fulfil his or her potential. In this digitised age of instant judgements, even more so.

Fuelled by YouTube clips and social media, sportsmen and women are tested like never before. The pitfalls are bountiful. Players are hyped beyond reason – built up and placed under a microscopic lens where every action is scrutinised. And then, if performance drops below expectations, even for a second, they are knocked down relentlessly. Within this context, witnessing an athlete rise above all obstacles to truly master their craft is one of the most awe-inspiring sights around.

2007/08 was the year Cristiano Ronaldo evolved into the best player in the world – an award bestowed upon him by FIFA when he was crowned 2008 World Player of the Year. Before that season, his development at Manchester United had been gradual.

He started as “the wee show-off who was desperate to convince everyone how good he was,” as Sir Alex Ferguson once described him. By 2006/07 he had honed his incredible natural talent sufficiently to win an unprecedented trio of individual awards – PFA Player of the Year, Young Player of the Year and Football Writers’ Player of the Year – as the Portuguese youngster helped catapult the Red Devils to a first Premier League trophy in four years.

But if those four years showed a player learning how to walk and, subsequently, run, 2007/08 was the year that the boy from Funchal learned how to fly.

In one of the finest – if not the finest – individual seasons in Premier League history, Ronaldo scored 42 goals in all competitions. In the league he hit 31 goals in 34 appearances at a rate of a goal every 88.6 minutes. If those numbers appear staggering enough in their own right, it’s worth a reminder that Ronaldo was only 22 at the start of this jaw-dropping season. And was playing on the wing.

At the time, the very concept of a winger scoring so many goals was nigh on unheard of. Not long after his 23rd birthday, Ronaldo eclipsed George Best's 40-year-old record of 32 goals from a winger in one season. He fell just short of equalling Denis Law's record tally of 46 goals in all competitions at United. The Portuguese's minutes-per-goal ratio that year is also superior to Luis Suarez’s rate of a goal every 95.5 minutes in 2013/14, though Suarez racked up double CR7’s six assists.

If the stats are impressive, they only go so far in illustrating just how brilliant Ronaldo was in a year he was instrumental to Manchester United’s league and Champions League double, secured in the soaking rain of a cool night in Moscow. Quite simply, it was the year Ronaldo revolutionised the role of a winger in modern football.

Like Suarez in 2013/14, Ronaldo’s 2007/08 campaign began under a cloud. In United’s second game of the season he was sent off in a 1-1 draw at Portsmouth for appearing to aim a headbutt at Richard Hughes. Ferguson claimed his star winger had been provoked but fined his player anyway. “He's fallen for it,” said Ferguson. “You have to have a bit of calmness. You have to remind yourself you're a better player than they are.”

A three-match ban followed, but Ronaldo learned his lesson and returned from his suspension a more mature player. He scored his first goal of the campaign against former club Sporting in the Champions League; a low, sweeping header at the Estadio Jose Alvalade for which he implored pardon. A goal rush was coming: over the course of the campaign Ronaldo would show just what a rounded, uniquely talented player he had become; not just through the sheer number of goals scored but also by their dazzling variety.

Bullet headers like the one at Rome's Stadio Olimpico in the Champions League quarter-final; an iconic header that mixed the brute strength and neck muscle fortitude of football’s all-time greatest headers with the sheer athleticism and hangtime of an NBA superstar. Long-range stunners. The Ronaldo trademark – a rapid, Cruyff turn-style flick from one foot to the other which pulled a hapless defender out of position before he slammed the ball past a keeper (like those against Dynamo Kiev and West Ham, the latter in the opening minutes of a crucial game in the title race on the penultimate matchday).

Gravity-defying free-kicks like those against Portsmouth, Bolton, Sporting and Sunderland. Ronaldo redefined the art of the free-kick, perfecting a style that sent the ball rocketing off straight as an arrow and yet simultaneously loaded with dip and swerve. The technique caused nationwide debate. Pundits strived to uncover Ronaldo’s ‘secret’ and all kinds of theories were put forward, from his standing stance to hitting the ball on the valve. “The secret? I will not reveal it, for I would be giving a trump card to my opponents,” Ronaldo quipped. Cool as you like.

The stunning nature and variety of Ronaldo’s goals was one aspect that propelled him into the pantheon of Premier League greats, but an equally important development in 2007/08 was a growing ability to perform when it mattered. Question marks had remained over Ronaldo’s big-game mentality – one final hurdle for Ronaldo to leap over in order to win universal acceptance.

And of course he rose to the challenge.

Ronaldo scored his first ever goal against United’s hated rivals Liverpool in a 3-0 win. He scored home and away against title rivals Arsenal. He scored key goals in the knockout stages of the Champions League against Lyon and Roma. And though his copybook was blotted with penalty misses in the Champions League semi-final and final, it was Ronaldo who opened the scoring in that Champions League final against Chelsea in Moscow with another towering header. "I've been lucky to have played with a lot of the top, top players and Cristiano is at the top,” Paul Scholes raved midway through the campaign. “To score that amounts of goals from his position is nothing short of amazing.”

Individually Ronaldo was exceptional – a stepover, a shimmy, a burst of pace and he was away. Few defenders could cope. His link-up play with fellow frontmen Carlos Tevez and Wayne Rooney was also outstanding. The trio formed a phenomenal partnership, perhaps best highlighted in a 4-0 win against Aston Villa where they ripped Villa apart like savages. “If you could ever try to set the benchmark, that's it,” Villa manager Martin O’Neill said, stunned. Ronaldo scored a backheeled flick through a Villa player’s legs. It was another day at the office.

In the Premier League era only seven players have scored 30 goals or more in a league campaign. Cristiano Ronaldo is the only man to do so playing from a position out wide, and the second-youngest to do so after Andy Cole in 1993/94. It was the year he was immortalised in Manchester United history. The year he became the best player in the world.