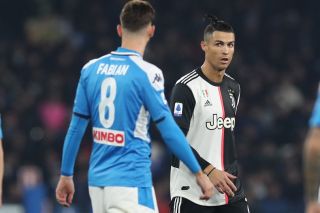 Maurizio Sarri's Juventus take on his old team Napoli in Rome tonight for the Coppa Italia final – and the chance for his first ever trophy in his native Italy.

Ahead of the resumption of Serie A this weekend, Italian football treats us to a set-piece game, with the first silverware of the season up for grabs.

It was Lazio who took home the trophy last season, meaning that the Coppa Italia is one of the few cups Cristiano Ronaldo has yet to lift.

DID YOU KNOW? You can now get BT Sport on Now TV – find out how here

While Juventus have been dominant in Italy over the past decade – they are currently top of the league table and hope to lift their eighth straight title –  the game is far from a foregone conclusion, with Napoli running out 2-1 winners in the last meeting between the two sides in January.

Kick-off is at 8pm BST, with the game being shown on BT Sport 2 in the UK. See below for watching details where you are.

SEE ALSO Premier League live stream best VPN: how to watch every game from anywhere in the world

How to watch Coppa Italia outside your country

How to watch a Coppa Italia live stream in the UK

Coppa Italia is broadcast on BT Sport. You can now get BT's sports channels for £25 a month, contract-free.

How to watch a Coppa Italia live stream for US subscribers

If you want to watch the Coppa Italia in the US, you can tune into ESPN. You can buy subscriptions to the service for $4.99 a month.

How to watch a Coppa Italia live stream for Canadian subscribers

In Canada, the Coppa Italia is on FloSports. Plans start at $12.50 a month.

How to watch a Coppa Italia live stream for European subscribers

Setanta Sports has the rights for the Coppa Italia in a number of European and Asian countries, including Armenia, Azerbaijan, Belarus, Estonia, Georgia, Kazakhstan and Lithuania.

How to watch a Coppa Italia live stream for Singaporean subscribers

You can watch matches live with StarHub, which costs $29.90 per month with a 24-month contract.

How to watch a Coppa Italia live stream for Scandinavian subscribers

In Nordic countries - Denmark, Finland, Norway and Sweden - the Coppa Italia is broadcast on NENT.