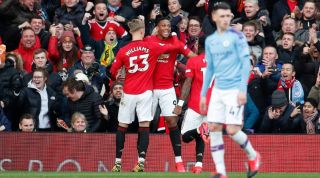 It's over. Liverpool have finally dragged themselves out of their diabolical slump, returning to winning ways after their whopping one game losing streak. Reds fans breathed a collective sigh of relief as one of the darkest spells in the club’s recent history came to an end on Saturday, as Jurgen Klopp’s side defeated Bournemouth 2-1.

We’re being cheeky, of course. But what impact does all of this have on the FourFourTwo long table?

Every week or so, we update this table revealing how the Premier League would look if you listed teams by points rather than position.

We’ve been doing a variation of this Cann table - or the Premier League long table, as we simpletons at FFT Towers like to call it - for a while now. It ably demonstrates the gulf between pockets of the league. If by ‘pockets’ we mean ‘one team’ and ‘the other 19’.

Manchester City’s loss in the derby on Sunday means Liverpool now enjoy a frankly ridiculous 25 point lead over their nearest rivals. There are nine games left to play. Anyone fancy betting against them? One of those nutters who backed Leicester to win the title in 2016 from the outset, perhaps? No?

The gap from top to bottom is now an eye-watering 61 points. But a look at our table shows there are still exciting mini-leagues opening up here, there and everywhere.

Manchester United have leap-frogged Wolves and are in hot pursuit of Chelsea in fourth. Ole Gunnar Solskjaer’s revitalised Red Devils could also have third-placed Leicester City in their sights. Catch either club and Champions League football will surely be theirs.

Aston Villa have a chance to put Norwich in a very precarious position on Monday night when they face Brendan Rodger’s Foxes. A win would open up a yawning six-point gap between the Canaries and their nearest relegation strugglers.

Meanwhile, there’s not much air between Everton, on 37 points, and Wolves and Sheffield United on 43, with four teams sandwiched in that gap.

While you’re here, why not take advantage of our brilliant subscribers’ offer? Get the game’s greatest stories and best journalism direct to your door for only £12.25 every three months – that’s less £3.80 per issue! Save money with a Direct Debit today

LIST 14 of the easiest title wins in English football history

QUIZ Can you name every team in the First Divison the last time Liverpool won the league (1989/90)?