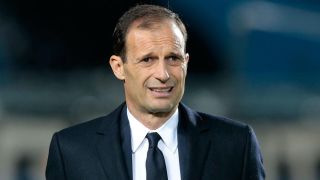 Massimiliano Allegri has warned Juventus that Monaco will pose a threat to their Champions League dream as the Serie A leaders seek to secure a spot in the final on Tuesday.

Juve won 2-0 in the away leg to put themselves in prime position for a place in next month's Cardiff showdown, but Allegri wants to see his side go for the win on home soil.

"We need to be fully focused for the match," he said. "Monaco have nothing to lose and will be dangerous.

"We've got a small advantage after the first-leg win, but we have to play as if it's a one-off match.

"It will be difficult, but we need to have a positive approach."

Gonzalo Higuain scored both goals at the Stade Louis II and Allegri – who discussed several selection considerations – dismissed fears that an ankle knock sustained in training on Monday would rule him out.

"There's nothing wrong with Higuain. He's fit to play," said the Italian. "One of Claudio Marchisio, Sami Khedira or Miralem Pjanic will play in midfield.

"I need to decide whether Andrea Barzagli or Juan Cuadrado plays.

"Dani Alves is in a good moment. He is an important player that gives us lots of experience."

Higuain was the hero again on Saturday as Juve secured a last-gasp draw in the derby with Torino, leaving them seven points clear at the summit with three games left.

It was the first home league match Juve have failed to win this season, but Allegri was content simply to avoid defeat.

He said: "It was vital not to lose. You cannot win every game. When you reach the end you count up the points. There are matches you have to win, but when you realise that you cannot win, you have to make sure you don't lose."