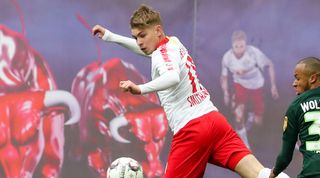 Smith Rowe has struggled with injury since joining Leipzig on loan in January, but the German club think he's worth keeping for next season, according to Kicker (via GGFN).

The 18-year-old Croydon native signed a new long-term contract with Arsenal at the begninning of this season.

Leipzig are thought to be keen on adding an option to buy into any loan extension for the teenager, but Arsenal are unlikely to accept any such an option given that they didn't agree to one in January either.

The youngster has only made one Bundesliga appearance for Leipzig this season, having made a token substitute appearance in his side's early-April win over Wolfsburg.

Smith Rowe will be coached by the Julian Naglesmann if he stays on next term – the highly rated boss takes over this summer, having overseen Reiss Nelson's development at Hoffenheim in 2018/19.

Quiz! Can you name the 35 current Premier League players who made their debut in the competition 10+ years ago?

6 big rivalries that are no longer horribly one-sided