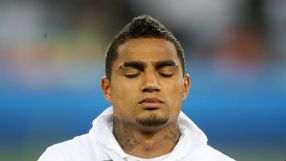 The AC Milan player suffered the injury in a Champions League tie against former club Tottenham Hotspur and although he appeared as a substitute against Palermo on Saturday, has not fully recovered, the Ghana Football Association announced on Wednesday.

No replacement has been named for the German-born Boateng, who switched his allegiance to Ghana prior to last year's World Cup in South Africa, where he helped the Black Stars to a quarter-final place.

Ghana meet Congo in Brazzaville on Sunday in an African Nations Cup qualifier and then England at Wembley next Tuesday.