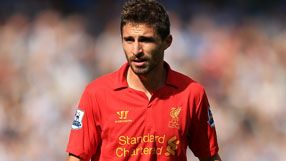 The Italian Football Federation (FIGC) website confirmed that the 21-year-old suffered the injury to his right foot while preparing for the match against Sweden in Pescara.

Foot injuries are often slow to heal, meaning Borini, signed from Roma in July, could be set for a lengthy absence.

That would leave Uruguayan Luis Suarez as Liverpool's sole fit striker as they try to kick-start their season.

Rodgers was unable to replace Carroll before the transfer window closed.

Liverpool have endured one of their worst starts to a top flight season, winning just one of their opening seven Premier League matches in which they have scored only nine times.

Borini is yet to score in the league.