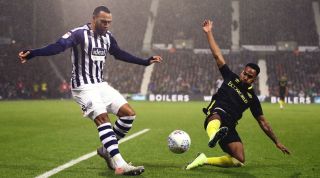 Last season’s 11th placed finish was the Bees’ poorest return since promotion to the Championship in 2014, but this year looks like their best shot at the play-offs since that first season in the second tier.

Losing top scorer Neal Maupay to Brighton last summer was a blow, but 24-year-old Ollie Watkins, challenging for the league’s top scorer, could fire Brentford back to the top flight for the first time since 1947. French winger Bryan Mbuemo, only 20, is also enjoying a strong first season in England.

With plans to move into a new all-seater stadium next season, fans may be deprived the chance to say a final farewell to Griffin Park – although introducing the ground with Premier League football would be a decent consolation.

West Bromwich Albion, meanwhile, are sitting pretty at the top of the Championship. Slaven Bilic’s men know their history too: it’s Leeds United who will be feeling a little more under pressure not to bottle another title run-in, which would leave the Baggies with a home-run.

Besides a sticky seven-game period that stretched from mid-December right through to the end of January, West Brom have been stellar this season. Hal Robson-Kanu, Matt Phillips and VAR advocator Charlie Austin have provided the goods: the squad has plenty of Premier League experience with the likes of Jake Livermore and Kieran Gibbs, not to mention the all-time Premier League appearance-maker in the resigned Gareth Barry.

Kick-off is at 7.45pm BST and the game is being shown on Sky Sports Football, Sky Sports Main Event and Sky Sports Ultra HD in the UK. See below for watching details where you are.

If you’re on holiday or just simply out of the country, your domestic on-demand services won’t work – the broadcaster knows exactly where you are from your IP address. Your access to the game will be automatically blocked, which is annoying if you’ve paid a subscription fee and don't want to use an illegal, buffering stream that makes you miss another moment. And that's where we recommend ExpressVPN (more on which below).