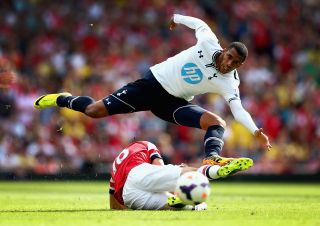 The France international suffered the setback during Tottenham's 1-0 defeat to Arsenal on Sunday.

Capoue, a close-season arrival from Toulouse, left the field on a stretcher after Santi Cazorla fell on his leg in the 73rd minute, with early reports suggesting that he could be out for several months.

However, the club have now dispelled those fears.

"(Etienne) was immediately taken to hospital to consult with a foot and ankle specialist," a statement on the club's official website said.

"Early indications suggest the France international will be unavailable for a period of four weeks."