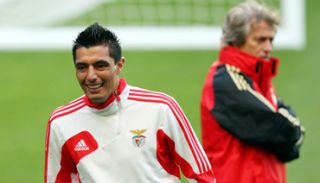 Cardozo pushed Jesus and angrily gesticulated at the coach after the final whistle of a match that wrapped up a terrible end of season for Benfica.

"I apologise to all Benfica fans and want you to know I have this club in my heart. It was a terrible and nerve wrecking end of season and I hope you never doubt my passion," Cardozo wrote on his Facebook page late on Monday. "I love Benfica".

Benfica ended the season empty-handed, having lost the championship to arch-rivals Porto and the Europa League final to Chelsea in the space of just a few days.

Although Cardozo may still be subject to disciplinary proceedings by the club, Jesus reacted coolly to the incident.

"Cardozo was hot-headed at that very complicated moment. He later apologised in the locker room," he said.

Cardozo, 30, is Benfica's top foreign goalscorer of all time with over 140 goals since he joined the club in 2007.