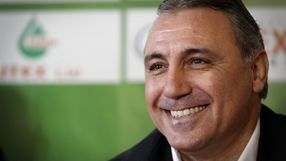 Trud daily said a Chicago police officer confirmed they had received a complaint from Svetlozar Momchilov, owner of the U.S-based newspaper Bulgaria Now, adding that the charge was listed as battery.

Momchilov was quoted as saying he was punched by Stoichkov during Chicago Fire soccer club's 15th anniversary party at the Chicago History Museum on Monday, after asking him for an interview.

Former Barcelona player Stoichkov, who is now a coach at Litex Lovech, played for Chicago Fire between 2000 and 2002.

The flamboyant Stoichkov is considered the best Bulgarian footballer of all time but is also known for his aggressive manner on the field and frequent arguments with referees and other players.

In 2006, The Dagger, as Stoichkov is known in Bulgaria, was sued by a former student in Washington DC, whose leg he broke in a violent tackle during a match against DC United in 2003.

In 2008, Stoichkov, who led Bulgaria to the semi-finals at the 1994 World Cup in the United States, allegedly attacked a Bulgarian photographer in a Barcelona restaurant.