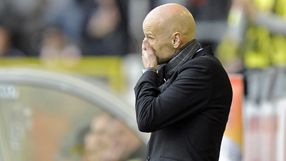 Cologne lost to Augsburg 2-1 on Saturday to drop to the relegation play-off spot in 16th place, triggering the wrath of the club board and fans who confronted players upon their return.

The former Bundesliga champions said however that they would "turn the corner" with Solbakken rather than letting him go now.

"There will be drastic changes in the way the team prepares for the game against Werder Bremen [next week]," Claus Horstmann, the club's director, said in a statement after most major German media had reported Solbakken had been fired.

"These changes are the task of Stale Solbakken and we have discussed this with him."

Werner Wolf, head of the shareholders' group said Solbakken would spearhead their efforts to stay up.

"We are convinced, after a string of intensive discussions, that we can turn the corner with Stale Solbakken," said Wolf.