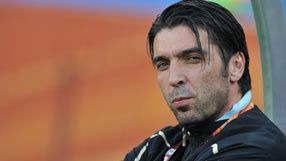 Buffon, who last played in Italy's first game at the World Cup, is recovering from back surgery but missed a team photoshoot on Friday and has appeared little at the training ground.

His absence led to media speculation his days at Juve could be numbered.

"You'll need to ask him why he's not been around much. Maybe he could have come to the training ground a few times," Del Neri told a news conference, adding he hoped Buffon would be fit by January.

More pressing for Del Neri is news that Serbia winger Milos Krasic and defender Nicola Legrottaglie have been ruled out for around 25 and 40 days respectively with thigh problems.

"Everything is going against us at the moment," said Del Neri, whose side won 2-1 at AC Milan last week to rise up to fourth in Serie A.

Juve, who drew 0-0 at home to Salzburg in Thursday's Europa League to complicate their chances of progressing, have a string of other injuries.

Left-back Fabio Grosso was dropped from the first team squad at the start of the campaign for rejecting a move away.