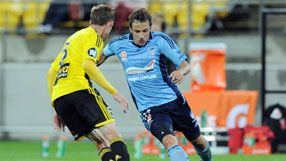 The Italy striker, 37, joined A-League side Sydney FC in September after a distinguished 19-year career with Juventus which took in six Serie A titles and a Champions League crown.

Del Piero said there was an offer to join Brendan Rodgers' Anfield revolution, but revealed the hurt of the 1985 Heysel disaster, which claimed the lives of 39 supporters, was too difficult to ignore.

"Why I said no to Liverpool? Negotiations with Sydney were already advanced and then I thought about what had happened at Heysel,” he told Italian newspapaer Gazzetta dello Sport.

"Juve and Liverpool were able to rebuild the relationship, but for many people that tragedy is an indelible memory. I thank all the clubs which wanted me, but I'm convinced of my choice."