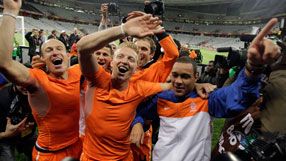 The modest Dutch only had reservations until July 5 at the Sandton Hilton hotel in Johannesburg because they probably did not expect to make it to the last week of the tournament.

World football's governing body FIFA accommodates all teams the night before and after a match but they must make their own arrangements for the other nights.

After beating Brazil in the quarter-finals, Netherlands extended their stay for a week but their accommodation is fully booked ahead of the final at Soccer City on Sunday.

The Dutch beat Uruguay 3-2 on Tuesday at Green Point Stadium in Cape Town to reach their first World Cup final since 1978 and will face Germany or Spain, who meet on Wednesday in Durban.