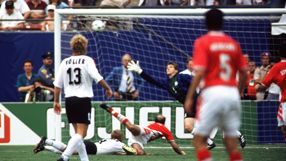 The court found Lechkov guilty for signing an unprofitable water and sewerage deal and pressuring a tax official.

Lechkov, who is the Bulgarian Football Union's vice-president, is widely remembered for heading the winner against Germany in the quarter-finals of the 1994 World Cup in the United States.

Lechkov, who played for CSKA Sofia, SV Hamburg, Olympique Marseille and Besiktas, can appeal against the ruling within 15 days.