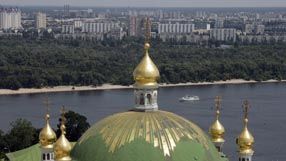 "We've warned all the embassies that fans must not go [river] bathing," Kiev deputy mayor Anatoly Holubchenko was quoted as saying by Interfax news agency on Thursday.

"They'll drink 300 grams (a third of a litre), jump in and drown and then we'll be told our beaches aren't safe," Holubchenko said. "A drowned drunk and unsafe beaches are two different things.

Ukraine's main river runs through Kiev where five Euro 2012 matches will be played, including the final on July 1. The other Ukrainian cities staging matches in the tournament, which Poland is co-hosting, are Lviv, Kharkiv and Donetsk.

Kiev residents flock in their hundreds to sandy beaches on the Dnipro in spring and summer. Every year police report dozens of drowning deaths of people who relax on the beach with a bottle of vodka and then go for a dip.