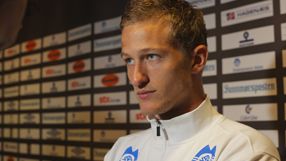 The 26-year-old international will join the Premier League club from Denmark's Aalesund for a fee reported in British newspapers to be around 3.5 million pounds.

United have been looking for a long-term replacement for Dutchman Edwin van der Sar who is 40.

Ferguson was speaking at a news conference in Glasgow before his team's Champions League match against Rangers on Wednesday.