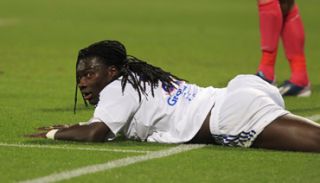 Lyon, the only Ligue 1 club listed on the Paris stock exchange, had to sell at least one player by Sunday to be able to report balanced yearly results.

"Having not been able to complete the move of any player approached for a transfer by June 30, notably Bafetimbi Gomis, the club considered Monaco's offer for Anthony Martial," Lyon said in a statement.

"The club completed Anthony Martial's move for five million euros plus an important share on a future transfer," they added, again taking aim at Gomis who "has not left yet".

President Jean-Michel Aulas said this week he had agreed with three clubs, including Premier League sides Swansea and Cardiff, over a transfer for Gomis but the player, Lyon's top scorer last season, had turned them down.

Martial, a 17-year-old forward, has played only 50 minutes in three league games so far but has long been tipped for great things following good performances with the youth teams.