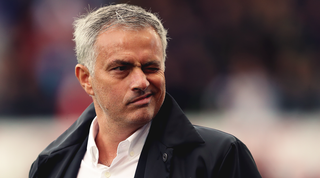 Jose Mourinho’s first full season in charge at Tottenham Hotspur promises to be more entertaining than ever, with or without the Amazon Prime cameras rolling.

The pressure is on to return to clinch a top four finish after failing to qualify for the Champions League for the first time since 2015/16, just a year on from reaching the final of European football’s flagship competition.

A trophy win is also high on the agenda, as any viewers of the ‘All or Nothing’ series will be more than aware, but there are several familiar doubts still hanging over the side: a worrying reliance on Harry Kane, the uncertain future of Tanguy Ndombele and a Jan Vertonghen-shaped hole in defence following his free transfer to Benfica.

However, right-back Matt Doherty has joined from Wolverhampton Wanderers and Southampton captain Pierre-Emile Hojbjerg was brought in to strengthen the midfield, and both are in line to make their debuts against Carlo Ancelotti’s freshly-bolstered Everton side.

The Toffees could be one of the most interesting watches in the early weeks of the new season, having splashed out big sums this summer to give their decorated Italian boss the squad he wants for his first full season in charge.

James Rodriguez brings the stardust following his arrival from Real Madrid, while some much-needed bite has been added to the midfield in the form of Allan and Abdoulaye Doucoure, who joined from Napoli and Watford respectively.

The fans are desperate for their Champions League-winning boss to let them dream again, and making a statement by winning away in north London on the opening day would be a big step in the right direction.

The trio of big signings should all start, but Ancelotti does have some selection problems to contend with.

Fabian Delph, Jean-Philippe Gbamin and Cenk Tosun are out with injuries, while Andre Gomes and Mason Holgate are doubts.

Kick-off is at 8.15pm BST and the game is being shown on Sky Sports Premier League, Sky Sports Main Event and Sky Sports Ultra HD in the UK. See below for watching details where you are.

If you’re on holiday or just simply out of the country, your domestic on-demand services won’t work – the broadcaster knows exactly where you are from your IP address. Your access to the game will be automatically blocked, which is annoying if you’ve paid a subscription fee and don't want to use an illegal, buffering stream that makes you miss another Jose Mourinho tantrum. And that's where we recommend ExpressVPN (more on which below).