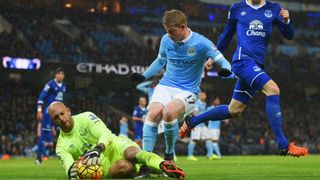 Martinez's side was forced to withstand lengthy spells of City pressure at the Etihad — especially after the break — but the title hopefuls were denied by a string of impressive Howard saves.

"You rely on character and Tim Howard is an example of that," Martinez said. "You get good and bad moments of form and there are always a bit more extreme views on a goalkeeper, whether you play well or make a couple of errors.

"The way Tim prepares for the games, trains on a daily basis, faces adversity and takes responsibility is why as a manager you have blind belief in him. He is an incredible influence on the younger players and you will never see him blaming anyone else. He accepts responsibility. It's no accident that he has made 350 Premier League appearances."

While Everton was on the back foot for much of the second period and was perhaps fortunate not to concede a penalty when John Stones brought down Sterling in the final minute of injury time, Martinez's men had chances to lead before halftime.

The visitors' best chances came via Gerard Deulofeu's wayward strike and an impressive volleyed effort from Leon Osman, with Martinez adding: "In the first half we were very good and controlled the game for long spells. We had two big moments in front of goal — Gerard Deulofeu's chance and Leon Osman with an incredible bit of technical ability. In the second half we didn't impose ourselves as well but had to show resilience and defend well.

"It's been over a year since Manchester City haven't scored at home and I take satisfaction in the way that we had to defend. Every time we went forward, we looked threatening even though we didn't do it as often as we wanted. Overall, we can take incredible satisfaction from this performance. To have that defensive ability, it was very pleasing. We can build on this performance in the second half of the season."