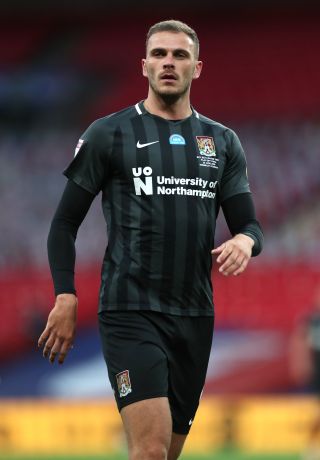 Northampton striker Harry Smith has called for betting firms to be banned from sponsoring football clubs’ shirts after his gambling addiction nearly cost him his life.

Smith, 25, who attempted suicide in 2017 after his gambling spiralled out of control, said addiction among footballers is rife and that clubs are putting profits ahead of player welfare.

Speaking ahead of World Mental Health Day, Smith told the PA news agency: “It should stop, 100 per cent.

TODAY IS WORLD MENTAL HEALTH DAY! Let's make #WorldMentalHealthDay top trending. Attention on social media can lead to more awareness and give #mentalhealth a higher priority worldwide. Please help us to reach as many people as possible by retweeting and using our hashtag💚 pic.twitter.com/apqIwefHac— WorldMentalHealthDay (@WMHDay) October 10, 2019

“There’s enough advertising around the ground. It’s just greed more than anything. It’s all about money and the welfare of a player probably comes second.”

A House of Lords Select Committee, set up to review the impact of the UK gambling industry’s impact on sport, recommended in July that shirt sponsorship at Premier League clubs should not be allowed.

“There’s enough advertising around football with regards to gambling, why the need to promote it on their shirts and shorts?” Smith said.

By paying attention to those around you, it might just save a life. pic.twitter.com/uG5NZEioKo— WorldMentalHealthDay (@WMHDay) October 30, 2019

“It’s a massive problem in football, if I’m honest, especially gambling. I’ve been in four or five changing rooms and in every single one of them there’s been at least one person who has a gambling problem.”

Former Millwall and Macclesfield forward Smith, who lost £20,000 in one night in a hotel room while on loan at Swindon in 2017, took a break from football in 2018.

He spent five weeks in rehabilitation at Tony Adams’ Sporting Chance clinic and said the decision helped save his life.

“At Easter in 2017 I had a bad relationship break-up, I was losing friends and causing rifts in the family and it was all going on behind closed doors,” he said.

“No-one had a clue in football, the manager at Millwall, the players, I was keeping it all to myself.

“I was losing everything around me. I’d sought help before, but it wasn’t working for me. I’d say I wanted help and got it, but wasn’t giving it 100 per cent.

“It got to a point where I didn’t know which way to turn and I remember it was about 12 o’clock at night and I sat there and just took a load of tablets and drank.

“I’ve never spoken about this publicly. That was my way out. It was a cry for help possibly, I don’t know. I went to sleep and my intention was not to wake up.”

Smith, who has started in Northampton’s last two Sky Bet League One games after “falling back in love with football” said efforts had been taken by football’s governing bodies in recent years to help address mental health issues, but it was not enough.

“Sporting Chance was brilliant. It was a life-changer for me but, take that away, there’s so much more that can be done, from the Professional Footballers Association to the clubs themselves.

“When the PFA come in, all the lads are like, ‘oh no, they’re here again’. Addiction is not taken seriously enough.

“In my opinion it’s rife, especially gambling. It’s rife from the Premier League to the lower leagues, it’s everywhere.

“A football club’s dressing room is completely macho, there is no place for the weak.”

Smith said addiction within football can only be addressed when society in general changes its attitude towards mental health and that he was passionate about helping break the stigma.

“It’s not just football, it’s worldwide,” he said. “The number of people taking their lives is staggering really. It’s devastating. I’ve been there.

Welcome to the world’s first ever virtual March for Mental Health! ❤️ Over the next 24 hours we’ll be joined by mental health experts, advocates, campaigners, and those with lived experience. #MoveForMentalHealth#TimeToInvest— Speak Your Mind (@gospeakyourmind) October 8, 2020

“When I left Millwall, I won’t name the club, but I was going to sign for a club interested in me.

“They didn’t know about my problems at first, but they read up and responded by saying they didn’t want to sign me because I was mental.

“No wonder footballers are afraid of speaking out when there are people in clubs making comments like that.”