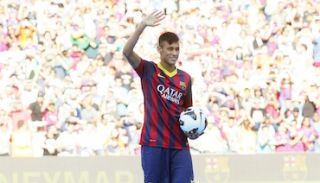 The Spanish champions beat arch rivals Real to the signature of one the game's brightest prospects in a deal worth around 57 million euros, despite a late approach from the nine-times European Cup winners.

The 21-year-old was given permission to leave the Brazil national team squad to fly to Barcelona to sign his contract and be presented on Monday.

Neymar flew from Rio de Janeiro and returned to rejoin his national team in Iglesias's Gulfstream jet, which the singer hires out when he is not using it himself for concert tours, his office was reported to have said.

Iglesias was a goalkeeper in the Real Madrid youth ranks before he embarked on a singing career.