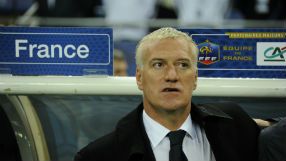 "I want to remind him that I am the only one to decide who will be picked and how long those who are picked will play," Deschamps told a news conference after naming his 23-man squad to face Japan in a friendly and Spain in a World Cup qualifier this month.

"There is only one to decide and it's me."

Diaby was ruled out of action for three weeks after sustaining a thigh injury in a 2-1 defeat by Chelsea in the Premier League last Saturday.

"I think it was a mistake to play him with the national team," Wenger said after Diaby picked up yet another injury.

"I said many times that if France wanted Diaby in Spain they should not take him for Finland and Belarus."