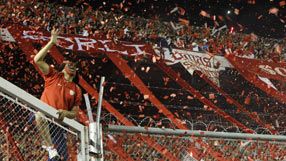 Goalkeeper Martin Silva of visiting Uruguayan side Defensor Sporting suffered a cut in his head from a stone thrown from the terraces before the second half kick-off in the match at Independiente's Libertadores de America stadium on October 19.

The Uruguayan team's officials wanted the match suspended but the referee refused and Silva played on with his head heavily bandaged.

Independiente won the second leg of the second round tie 4-2 to reach the quarter-finals 4-3 on aggregate.

"The incident was deemed an isolated occurrence, which nevertheless deserves punishment by this confederation in order to avoid a repeat of such acts," Conmebol said in a statement.

Independiente will play the second leg of their quarter-final against Colombia's Deportes Tolima at the neutral venue.

The Argentine club were also ordered to improve security at their ground or risk greater sanctions if there is a repeat of crowd violence.