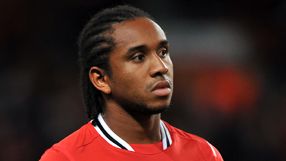 The Brazilian has not featured since the Europa League defeat against Athletic Bilbao last month.

"I don't think he'll play again this season," Ferguson, whose side lead the table by five points with four matches to play, said on United's website.

"There are only four games left and it will be difficult for him."

United, who face Everton at home on Sunday before title rivals Manchester City travel to bottom club Wolverhampton Wanderers, are also without Paul Pogba who has an ankle injury.