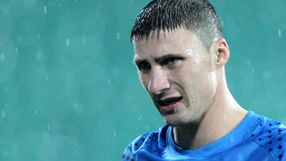 "Zeljko Brkic will take his place and (reserve centre-back) Slobodan Rajkovic is also out with a back problem," Petrovic told reporters on Thursday.

The duo joined a growing injury list including defenders Nemanja Vidic and Pavle Ninkov as well as midfielder Zdravko Kuzmanovic. Striker Nikola Zigic is also doubtful with a groin strain.

Petrovic said he hoped some of them could recover for the visit to Estonia on Tuesday, with Serbia looking to kick-start their campaign after collecting only four points from as many games in Group C.

The Serbs will entertain Northern Ireland behind closed doors in Red Star's stadium to serve a one-match crowd ban imposed by UEFA after their fans caused a riot during last October's qualifier in Italy.