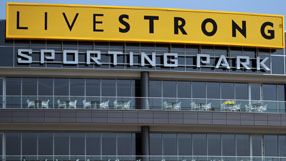 Under an unusual stadium naming deal signed in 2011, the club agreed to donate $7.5 million over six years to the Livestrong Foundation cancer charity set up by the American rider after his successful treatment for the disease.

Armstrong has been accused of being involved in an elaborate doping conspiracy and the United States Anti-Doping Agency has stripped him of his seven Tour de France titles.

Heineman said the charity did good work for cancer sufferers despite all the adverse publicity surrounding Armstrong.

"It's really about helping those afflicted with cancer," explained Heineman at the Leaders in Football conference at Chelsea Football Club's Stamford Bridge ground.

"We've got an agreement for another four years for it to be Livestrong Sporting Park. We don't stick our head in the sand... but it doesn't change how we feel about the Foundation and the work they do."