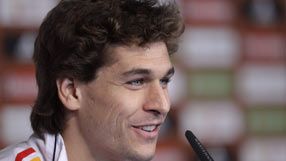 The Italian champions have long been searching for a main striker and talks with Bilbao and Llorente have been going on for weeks with the option of signing the 27-year-old in January now unlikely.

"I'm optimistic on his contract. In any case, he will join Juve on July 1," Juve sporting director Beppe Marotta told Italian radio.

Llorente, a tall and powerful forward known as "the Lion King" for his mane of blond hair, has barely featured for Bilbao since announcing his intention to leave when his contract ends in June.

Juve are still being linked in Italian media with a January move for Shanghai Shenhua's Ivorian forward Didier Drogba as they look to shore up their title charge after a stuttering start to the year.