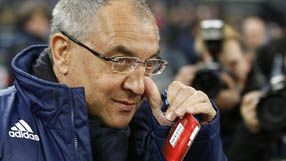 His assistants ran the session with Schalke staying silent and saying a comment would be made "in the coming days."

Magath denied reports before the game against Valencia on Wednesday he was being forced out at the end of the season but club officials have yet to confirm or deny the reports.

His numerous signings, 40 in 18 months, have mostly failed to deliver, hurting the debt-ridden club.

They reached the Champions League quarter-finals for only the second time with a 3-1 win over Valencia and a 4-2 aggregate victory.