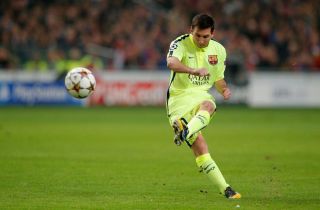 The prolific Argentina forward became the highest scorer in La Liga history with a hat-trick in a 5-1 hammering of Sevilla on Saturday and broke yet another record in Nicosia three days later.

Messi passed Real Madrid legend Raul's Champions League tally of 71 goals when he diverted Rafinha's strike into the back of the net after 38 minutes against the Cypriot champions.