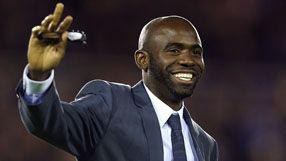 The former Bolton Wanderers midfielder collapsed on the pitch during an FA Cup quarter-final against Tottenham Hotspur in March and his heart stopped beating for 78 minutes. He recovered but was forced to retire as a player in August.

Speaking to reporters at the Leaders in Football business convention in London he said he now found going to matches tough emotionally, but was attracted to a career in sports politics.

"I like this kind of side of it, making decisions," the former England Under-21 player said. "I have a meeting with Sepp Blatter next week (October 30), hopefully he can get a job for me."

Muamba, who was given a Brazil No.9 shirt by World Cup winner Ronaldo earlier in the day, said he was recovering well but still suffers from memory lapses.

"As far as I'm aware the doctor told me it would take me about a year for my memory to get back to normality, how it was before," Muamba said.

"But I try not to think about it too much. I try to enjoy my life and enjoy my family."