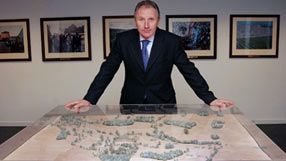 The 105 million pound project, which was first suggested in 2001, has been repeatedly put back because of doubts over funding. The site will be in Burton-upon-Trent, central England.

The centre, widely expected to be an English version of France's Clairefontaine academy, is due to be completed in mid 2012 after the FA board agreed to underwrite the project.

"St. George's Park will be a world class facility providing top class education for future generations of English football coaches," David Sheepshanks, FA board member and chairman of the National Football Centre board, said in a statement.

"It will also be an internationally-leading sports medicine and performance research centre; a training home to enhance international team development; and an inspirational hub for everyone involved in football from the grassroots to elite," Sheepshanks added.