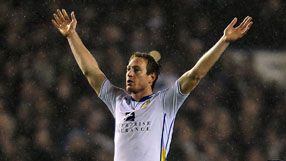 Becchio will put pen to paper on a three-and-a-half year contract with Norwich after a five-year stint at second tier Leeds during which he scored 86 goals in 221 games.

"I cannot wait to play my first game," the 29-year-old told the club website.

"I am really happy about having the chance to play in the Premier League. It is brilliant for me personally and for my career."

Norwich said the deal was subject to the relevant paperwork being approved by the footballing authorities.

Becchio, who has scored 19 goals in 31 appearances this season for Leeds, could make his debut in Saturday's league game at bottom club Queens Park Rangers.

Wales forward Morison, 29, has scored 12 goals in 59 games for Norwich since joining from Millwall in 2011.