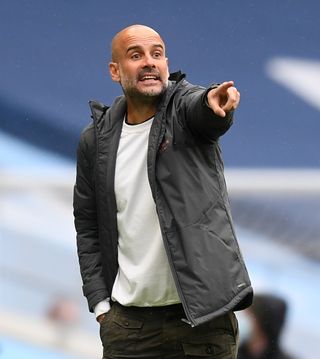 Pep Guardiola is confident Manchester City will be playing Champions League football next season after a hat-trick from Raheem Sterling helped blow away Brighton.

Sterling’s superb treble and goals from Gabriel Jesus and Bernardo Silva earned City a 5-0 success at the Amex Stadium which assures them of finishing runners-up to runaway Premier League champions Liverpool.

The club will on Monday discover the outcome of their appeal against a two-year ban from European club competitions following alleged breaches of club licensing and financial fair play regulations.

PEP 💬 All the credit is for @sterling7. Not just for the three goals, but they are important for what we have ahead of us. For his development as a player, because he wants to improve. We are delighted with his performance today.— Manchester City (@ManCity) July 11, 2020

“It’s the decision, so it’s so important, of course it is,” the Spaniard said of the appeal verdict.

“What we have done is win our qualification on the pitch. Nobody can doubt about this.

“In general the level we played today was quite similar all the season and now we are going to wait until Monday when the decision of UEFA will be taken.”

Asked if he was hopeful about the appeal being successful, Guardiola replied: “A lot.”