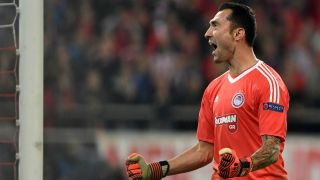 Former Belgium international Silvio Proto has undergone a medical at Lazio ahead of a prospective free transfer from Olympiacos.

The 35-year-old goalkeeper arrived at Clinica Paideia in Rome on Wednesday and is expected to provide back-up to incumbent starter Thomas Strakosha for the 2018-19 season.

Proto spent the majority of his career with Anderlecht and appeared 13 times for Belgium between 2004 and 2011.

He made 23 league appearances in Greece last season for Olympiacos, as well as five in the Champions League.