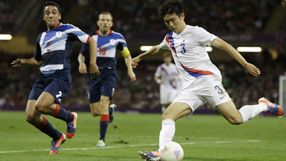 The 22-year-old joins the struggling West Londoners, who are three points adrift at the bottom of the table, from Korean side Chunnam Dragons for an undisclosed fee.

Yun was part of the South Korean side that won bronze at the London Olympics last year and made his full international debut in a World Cup qualifier last October.

QPR said on their website that the Korean had been granted a work permit and would be eligible to play once he had obtained a visa.