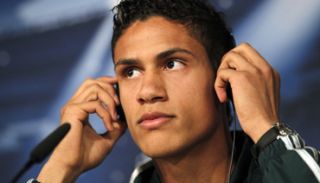 The France international stumbled awkwardly while making a tackle during Real's 1-1 draw at Espanyol on Saturday and had to be substituted after 19 minutes.

"I am sad! The tests today have revealed an injury to the meniscus. They are going to operate on me as soon as possible," the 20-year-old said on his official Twitter feed on Sunday.

Varane will miss the King's Cup final against Atletico Madrid on Friday, and Real's last two league games of the season.

The injury also makes it unlikely he will be available for France's tour to South America next month when they are due to play in Uruguay on June 5 and Brazil on June 9. Coach Didier Deschamps is to name his squad on Thursday.

Varane has won himself a starting place alongside Sergio Ramos in the centre of the Real defence in recent weeks, relegating more experienced team-mates such as Pepe, Ricardo Carvalho and Raul Albiol to the bench.