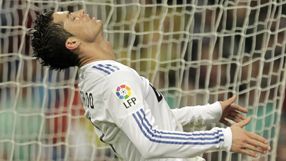 The Portugal forward was substituted during the second half of Real's 2-1 derby victory away to Atletico Madrid in La Liga on Saturday.

Ronaldo suffered a hamstring injury in the same area against Malaga on March 3, and returned to action for the club's 3-0 Champions League win over Olympique Lyon last Wednesday.

He is likely to miss Portugal's friendly internationals against Chile and Finland later this month and will be a doubt for Real's Champions League quarter-final first leg against Tottenham Hotspur on April 5.