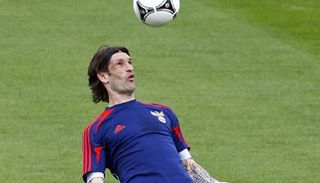 Twenty-six-year-old Granat (pictured) was included in Russia's squad for Euro 2012 by Capello's predecessor Dick Advocaat but has yet to make his international debut.

Kozlov, also 26, was a surprise addition to a 27-man squad, announced by Capello on Friday, having only attended Russia under-23 team's training camp some five years ago.

The Portuguese are joint second along with Israel - a point behind - having played six games each.

Russia's qualifier against Northern Ireland, postponed following a heavy snowstorm in Belfast in March, has been rescheduled for August.