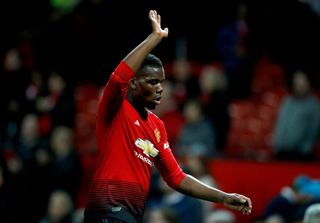 Ole Gunnar Solskjaer believes Paul Pogba will be at Manchester United next season.

Speculation about the midfielder’s future has increased again following United’s derby loss to Manchester City on Wednesday, with Real Madrid strongly linked with a move for the World Cup winner.

But at his press conference ahead of Sunday’s clash with Chelsea, Solskjaer said: “You can’t guarantee anything in football but yes, I think Paul is going to be here.

“I can assure you he is very determined to succeed at Manchester United.”

Eyebrows were raised when Pogba was the only non-Liverpool or Manchester City player to be named in the PFA team of the season this week given his erratic form for United.

“Paul’s done fantastic for us. He’s human. We’re all the same that we want him to do well. He’s a leader in that dressing room and on the pitch for us. He will be here as far as I can answer that.”

Solskjaer, meanwhile, will not be resting David De Gea after the keeper’s latest blunder for City’s second goal.

Former United keeper Gary Bailey wrote on Twitter on Thursday that Sergio Romero should be given a run to allow De Gea to rediscover his form, but Solskjaer disagrees.

“No, not at all,” he said. “Because I trust David. He’s, for me, been the best player United have had for the last six, seven years.

“He’s been absolutely outstanding. Going through tough patches is just part of a footballer’s career. David will be fine, no worries.”