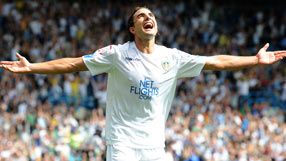 Somma, 25, has scored seven goals for his English club in league and cup this season, earning him a new three-year contract last week.

He was born in Johannesburg but moved to California aged 12. Somma, who also holds an Italian passport, played at San Jose Earthquakes before joining the Championship side.

There is also a return to the squad for Steven Pienaar of Everton and Fulham midfielder Kagisho Dikgacoi, both injured when South Africa played a 0-0 draw in Sierea Leone last month in an Africa Cup of Nations qualifier.