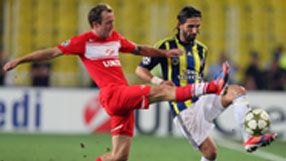 "A medical examination revealed inflammation of the small bones in his foot therefore McGeady will be sidelined for at least two weeks," the Russian club said on their website on Thursday.

The Ireland international picked up the injury in Tuesday's 4-1 World Cup qualifying win over the Faroe Islands.

Spartak, who are bottom of Champions League Group G after losing their opening two games to Barcelona and Celtic by the same 3-2 scoreline, host Benfica on Tuesday.