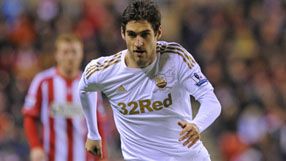 Graham, who was born and brought up in north-east England, said when he learnt of Sunderland's interest he was tempted by a move back home.

"As soon as I heard about the interest from Sunderland I didn't even have to consider any of the other options that were on the table," Graham told the club's website.

"I know first-hand the intense passion that people have for their football in this part of the world - it's special and there's nowhere else like it."

The 27-year-old former Middlesbrough forward was Swansea's top-scorer in the league last season with 12 goals and has hit the net seven times in the current campaign despite not playing as regularly under new manager Michael Laudrup.

Swansea lie eighth in the top flight and are set to contest the League Cup final next month against fourth-tier Bradford City. Sunderland are in 11th place, nine points above the relegation places.