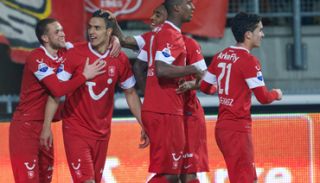 Felipe Gutierrez scored the only goal for Twente midway through the first half from a cross by Dusan Tadic.

Twente were considered title candidates this season but fell apart after the winter break when an eight-match winless streak cost coach Steve McClaren his job.

The play-offs are the last chance to qualify for European football next season.

"We completely dominated this match and therefore fully deserved this win though we could have make it easier for the second leg by scoring more goals," Twente coach Alfred Schreuder told reporters.

Utrecht finished fifth this season with a club record of 19 wins in 34 matches and put themselves in pole position to reach the final thanks to a 69th minute header from Cedric van der Gun to sink Marco van Basten's Heerenveen.

The second legs are scheduled for Sunday with the winners battling for the Europa League ticket on May 23 and 26.