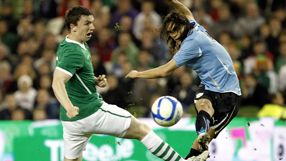 The visitors, who suffered a surprise 2-0 defeat in Tallinn on Friday, took a commanding 3-1 first-half lead thanks to goals from Diego Lugano, Edinson Cavani and Abel Hernandez before hanging on for victory in an open second period.

Fenerbahce defender Lugano kicked off the free-scoring first half after 12 minutes, taking advantage of some poor Irish defending to bundle home a scrappy opener.

Ireland's starting XI barely had 100 caps between them after coach Giovanni Trapattoni made eight changes from the side that beat Macedonia in Saturday's Euro 2012 qualifier but they drew level three minutes later thanks to a Shane Long header.

The impressive Cavani put Uruguay back in front after 22 minutes, neatly finishing off after good work from Maxi Pereira, and Pereira set up the third shortly before half-time when he put Hernandez clear to notch his second goal in three internationals.

The hosts, joint leaders of their group at the halfway mark of European Championship qualification, got one back through Keith Fahey's penalty two minutes after the break but were unable to grab an equaliser despite having the better of the remaining action.