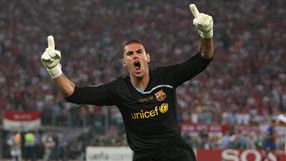 Valdes, Spain's number two behind Iker Casillas, will be 31 this month and has been at Barca since he joined the club's academy in 1995, making his debut for the first team in the 2002/03 season.

At a news conference previewing Sunday's La Liga match at home to Espanyol, Valdes did not rule out the possibility of trying "other cultures, other leagues and other countries".

"I renewed my contract in 2009 and it has never been an issue for me since," he said.

"It's not the moment to think about it now, there's still time. I am focused on winning games and time will tell."

A brilliant shot-stopper and a talented ball player, Valdes has won Spain's Zamora award for the fewest goals conceded in La Liga for the past four seasons.

He is one of only two men to have it won five times along with his predecessor at Barca Antoni Ramallets, who played in the 1950s and early 1960s.